The Memorial honors the Allied forces who shared in the invasion of Normandy on June 6, 1944 during World War II. The Memorial stands as a powerful tribute to the valor, fidelity, and sacrifice of D-Day participants. Visitors can expect both an educational as well as emotional experience, leaving with a clear understanding of the scale and sacrifices made during the largest amphibious landing the world has ever seen. The memorial also features the Richard S. Reynolds Sr. Garden, which echoes the design of the Supreme Headquarters of the Allied Expeditionary Force (SHAEF) shoulder patch, worn by those tasked with planning the invasion.

Get to know the national D-Day Memorial: 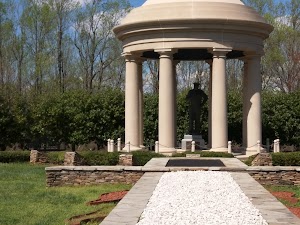 Jeff Tripp
03:54 06 Jun 18
A somber and moving memorial. I had the opportunity to attend 2 D-Day ceremonies with my Uncle. He was in the US Navy, but was assigned to the 316th Infantry Regiment, out of Bedford, for the invasion. They hit the beach at "Easy Red" on the first wave. To say the least he was extremely moved by the ceremony and the memorial. This needs to be operated by the government due to its importance.

Rebekah Vacca
22:34 27 May 18
Very nice memorial. Must do a docent led tour, as you really won’t get how the memorial is set up and designed, and that is basically all there is. Our tour guide was Kevin and he did an excellent job. The tour was ~1-1/2 hours and included with the price of admission. It is certainly a nice thing to do for a day trip. The memorial is beautiful and very well done. As someone else mentioned, the sculptures are unnervingly life-like.

Brian Crane
18:46 20 May 18
A remarkably well designed and symbolic memorial. Absolutely worth the trip. Staff are friendly and knowledgeable; our tour guide, Bob, did an excellent job of explaining the elements of the grounds. Don't miss it!

Michael Brown
19:54 27 Apr 18
Absolutely an amazing experience paying homage to America's finest hour. Tour guides are top notch and the sculptures have such attention to detail its uncanny. Highly recommend this to all!
See All Reviews