Visit the Lynchburg Community Market, the third oldest continuously running farmers market in the country.  Shop for fresh fruits and vegetables and beautiful works of art, or grab some lunch at one of the restaurant vendors.  Farmers come year-round on Wednesdays and Saturdays offering locally produces fruit, vegetables, cheese, meat, baked goods and other specialty items.  Located inside the Market, the Gallery and Alley offer artist’s handmade works.

In 1872, the Market was enlarged and rebuilt on Main Street, between 11th and 12th Streets to serve the growing population. Completed fall of 1873, the new Market had enclosed spaces and an auditorium. Today, the Community Market stands on the corner of Main and 12th Streets, opening its doors on July 2, 1932. The market continued to play an important role in the community until the 1950’s when community markets across the United States declined due to the growth of supermarkets and suburban development. In 1987, the Market went through its final architectural renovation to date, with landscaping, new parking outside Farmer’s stalls. 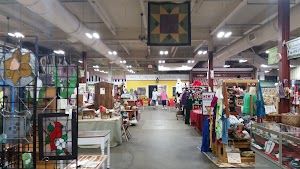 Ian Pilgreen
12:37 11 May 18
Everything here is fresh and amazing. All the businesses have been tried and tested by consumers and only the best remain at the Lynchburg Community Market. Barb's Dreamhut has some classic mom's breakfast, and I can reccomend any and all produce from here.

Aaron Borsay
20:06 28 Apr 18
An amazing place. Worth it for all the produce, fresh meat, eggs, honey, random things, Lorraine Bakery and the various places to eat food. Saturday morn is the entire community and often with outdoor music pending on the weather.

Alex Brown
10:24 12 Apr 18
I'm not one to say this but I wish I could give more than five stars for a venue. This is where humans come to be humans. Great food, community, sometimes music, wares, clothing, and anything else a town could want! Everyone is super friendly and there's tons of local businesses selling their products. I come here almost every Saturday morning to get bread and eggs. The prices are generally unbeatable. If I may, there's a shop in very back-left corner that has the most amazing chicken salad sandwiches, plus sides, for under $5.00. Tons of great coffee and sweets, too. Don't leave Lynchburg without visiting the community market!

Elizabeth Bourgeois
17:56 24 Feb 18
Having EBT is great you get more per dollar. Everyone is very nice. I bought at Crooked Creek, easy does it farm and Lorraine Bakery fresh bread 😋 !
See All Reviews